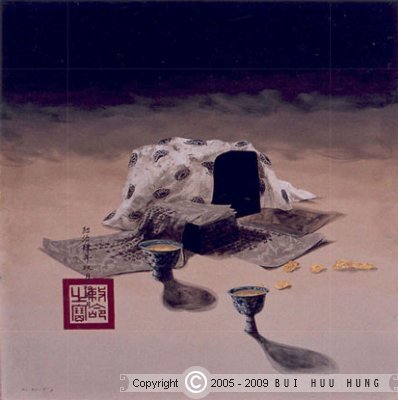 DAY OF FUTURE PAST

I am among those who, after long contact with so many Vietnamese artists, are of the opinion that lacquer whose enormous capacity for artistic ceration has been proven by certain artists in their diverse work and research-will in the near future become the artistic medium par excellence for representing this country since it acts as an exterior cultural sign of Vietnam’s vitality and uniqueness.

The proper and original method with which Vietnamese contemporary artists utillise lacquer exists nowhere in the world and is still a vast subject of wonder for art lovers and collectiors around the world. This is a new artistic form. It will no doubt remain as the chief contribution of Vietnamese painters to the world. In Paris, New York or Tokyo, artists utillise different media, from traditional materials such as gouache and oil, to equipment such as video and the great variety of objects used in installation art. If Hanoi is known for contemporary art, it is because of pumiced lacquer.  Vietnamese painting, viewed in the broadest sense of the word, is still imbued with the influence of the great Vietnamese artists of the preceding gennerations, such as the celebrated Bui Xuan Phai or Nguyen Tu Nghiem. But in the field of lacquer painting, the lofty stature of Nguyen Gia Tri seems to hover everything, much like the spirit of a founder, patron or ancestor, and his influence ca be seen in Bui Huu Hung’s latest works.

The style of Bui Huu Hung is an amazing cocktail of formal modernity in the service of a realistic, plastic language that depicts scenes and personages drawn from Vietnamese traditional culture and history. Mandarins in procession, pagoda scenery, felt-like, and sensual interiors-Bui Huu Hung’s works are probably the intimacy of memories, the beyond-time-and-space character which, only a perfectly trained artist can convey poetically.
It is also meaningful to notice that Bui Huu Hung-who is rightly considered by his peers to be one of the most talented lacquer artists today, and one of the few artists who can revive the spirit of lacquer painting created more than half a century ago by Nguyen Gia Tri-exclusively deals with realistic and traditional subjects to assert his aestheticism and his Vietnamese character in the world of Vietnam today which is so alien to his considerations. In Europe, Bui Huu Hung certainly would have been labeled a “Post-Modernist” which in my opinion is by no means derogatory. The reason is that Bui Huu Hung’s plastic art is strangely modern and this adds further quality to his works.

His backgrounds are an opaque fog that seems to directly emanate from researches on the most radical abstraction. The apparent simplicity of his compositions is achieved by a few hasty and nervous strokes. Bui Huu Hung’s plastic art, based on an economy of language that is fully formalistic also deviates from the decorative pomposity of Nguyen Gia Tri, in much the same way that in Europe the art of David is quite distant from Manet’s. Detail thus are removed, elements that are purely decorative serve merely as formal landmarks in the composition when viewed as a whole. It seems that Bui Huu Hung intends to challenge the whole trend of lacquer painting today whose acknowledged aim is simply decoration, prettiness, and adulterated Asian exoticism.
I have been always surprised by the incredible aesthetic difference between the contemporary artists of China and Vietnam, the two Asian countries with arguably the best painters in the region. While the Chinese artists show us a force and fury that is sometimes very surprising and more frequently use state-of-the-art techniques to assure their concepts brutally and with a crazy talent, the Vietnamese painters let us see peace and harmony based on a serenity of language and content that is also surprising especially when one recalls the trauma of their recent history. Thus with force on one side and calmness on the other, the most modern will to obtain something new at any cost expressed by Chinese artists contrasts with the harmonious and perpetual balance between tradition and modernity adopted by Vietnamese painters.

I dare to advance this comparison between the two schools of contemporary art in Asia to emphasize the qualities of Bui Huu Hung’s art which I have discussed and which are clearly seen in his most recent works currently on display at one of the best galleries in Hanoi. I can only express my modest but sincere wish to this artist whose career I have been following for years. He is the painter who has given me one of my most intense aesthetic pleasures in Vietnam. I do hope he will go on with his personal artistic research which has carried him so great a distance, and that his talent will be much stronger than his poetic readiness.

“THE COLOURS OF VIETNAM” SHINES IN US