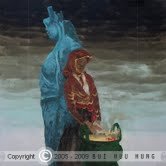 FROM THE TEMPLE OF TRADITION

Tucked away in a corner of the shores of West Lake in Hanoi, hidden under trees dwarfed by the new twenty-story hotels, and hardly visible from the road stands a house on stilts, a traditional, wooden, temple-like structure. This is the home of one of Hanoi’s most innovative and cutting-edge contemporary artists. You might not know it, though, by the look of the place. Cobwebs hang from beams, and straw mats are scattered on the floor. Yesterday’s tea sits in cold cups on a wet tray.

Only the pile of dishes containing thick residues of resin and the brushes leaning in a tin can would betray the fact that an artist works here. The place is not quiet. Half a dozen young men mill around mixing pigment, breaking eggshells, washing boards, and rubbing planks of wood with stone. This house, the studio of Bui Huu Hung, has become one of the centers of lacquer art in Vietnam and is the most renowned school in which Vietnamese artists receive systematic training in lacquer and in which international artists can take their first steps in the medium.

Lacquer has been practiced in Vietnam for centuries. In ancient societies, a resin extracted from lacquer trees was used for decorating the interiors of palaces, temples, pagodas, and communal houses and for polishing furniture. Lacquer as a medium in the plastic arts saw recent revival when in 1952, the French government established the first Arts School in Hanoi, the Ecole des Beaux-Arts de L’Indochine. Under the direction of its first Headmaster, Victor Tardieu, the School revived the ancient Vietnamese arts of lacquer and silk painting. Since the recognition of Nguyen Gia Tri as the first Master of Vietnamese lacquer painting, many younger Vietnamese artists have noted this trend and followed the Master to embark on the risky venture of reviving an old art form. Bui Huu Hung stands among the artists of this movement.

As a graduate of the Graphic Faculty of Hanoi Fine Arts University, Bui Huu Hung can trace his passion for this medium back to his student days when his attention was first caught by the lacquer arts. He began to take on ancillary studies investigating the subtleties of lacquer painting in the studio of Bui Tuan Thanh, whom Hung considers his most influential teacher. He reflects, “The teacher trained me in everything concerning technique from the very beginning to the end, but the most important thing is that he taught me even those things that he could not do himself. He showed me the direction, the way of development.”

This idea of the “way of development” is central to the process of lacquer painting. Just as life itself is multi-layered, so is the process to produce lacquer painting. In life, new events, impressions, and knowledge are laid atop the old. Through time, the old layers gradually grow pale. Old events become obliterated or crystallized into essences without details. In lacquer painting, the successive layers of colors, lines, and submerged eggshells or silver leaves disappear, leaving only the appearance of a dark, rough surface. At this point, other processes begin the technical process of polishing and uncovering and the almost magical process of gradually penetrating through the depth of these layers. As the item is burnished, some colors simply vanish while others are transformed. Here the intuitive response of the artist is especially important; the artist’s sense of when to stop the process has more to do with artistic flair than technical skill. Bui Huu Hung’s masterful comprehension of these processes is clear in his productions. In addition, his subtle intuition, continuous experimentation, devotion to art, and profundity of artistic thought have brought success to his creative work, making him one of the most well-established lacquer artists in Vietnam. In his methods and depictions, Bui Huu Hung challenges the whole trend of lacquer painting today, whose acknowledged aim is simply decoration, prettiness, and adulterated Asian exoticism, and to replace it with mythical reflection and realistic interpretation.

Lacquer painting as a medium does not just reflect the artist’s individual preferences and ideas, but corresponds to and reflects the character and aesthetic concepts of Vietnam. The lacquer medium lures by suggesting the possibility of penetrating its layers and attracts through the mystery of its unforeseen effects. In this medium, the boundaries between the real and the illusory world are displaced. Thus, its potential as a decorative tool is inalienable from its potential as a powerful artistic medium, an aspect that corresponds to traditional Vietnamese aesthetic principles.

The creative work of Bui Huu Hung not only involves the magical and paradoxical labor of applying layers of lacquer and then subsequently annihilating them through polishing; it also creates mystery, as it suggests the possibility of penetrating the artistic consciousness into the depths of vital, historical layers where legends and myths are born. It would be a great misinterpretation to see the gallery of faces in Bui Huu Hung’s latest works like portraits of real people of the recent past. They are, rather, the heroes of legends and ancient stories. Additionally, many are not central, but peripheral characters-the mother, sister, or beloved of the hero. Sometimes their images are not derived from mythical narratives but conjectured or created by the artist himself. Thus the artist does not simply retell or express known myths.

Bui Huu Hung’s favorite characters to depict are women in difficult circumstances. Their faces are full of sorrow, languor, expectation, or meditative silence. He depicts a range of women, including those who died young under mysterious circumstances and young female saints. His female characters thus address the fundamental human experiences of death, grief, and destiny, and the artist seems to approach even the issue of fatalism. Depicting the characters of the old myths and legends not only provides a profound interpretation of the fundamental events of human existence but also preserves through the centuries the basic principles of morality and the pathos of humanism.

In his work, Bui Huu Hung expresses both sentimentality and mystery from the ancient legends by depicting mythical personages realistically against a background of absolutely illusory space, space that is neither ground, nor interior space, nor pagoda. The distinctive marks of incense-burners, vessels, and manuscripts serve not to identify a specific place, but instead to evoke mystery that resists easy interpretation by the viewer. Interestingly, the non-objective abstract works of Bui Huu Hung are also directly connected to legends. In such legends, one sees miraculous transformation from one mountain top to another. The artist depicts such phenomena as the supernatural events in ancient stories and myths and those mystical moments occurring in daily life, as factual. They appear to the viewer both in concrete images and abstract forms. Though he washes away the boundaries between real and unreal in the artistic space of his works, Hung also emphasizes the co-existence of the principles of the real and unreal, accepting that the most improbable stories can exist alongside the prosaic and can transform a banal fact into beautiful myth.

Bui Huu Hung, rightly considered by this peers to be one of the most talented lacquer artists today, and one of the few artists who can continue to revive the spirit of lacquer painting deals exclusively with realistic and traditional subjects to assert his aestheticism and Vietnamese character. This he does in the world of contemporary Vietnam, a world now very alien to the subjects of his consideration. Bui Huu Hung may fairly be labeled a “Post-Modernist”. Such a title is in no way derogatory; his plastic art is strangely modern, and yet expresses ancient themes and characters.

The apparent simplicity of his compositions is achieved by a few quick and light strokes, but the meaning of his works can be complex or difficult, as they emanate from long reflections on radical abstractions. Bui Huu Hung’s plastic art, based on an economy of expression that is fully formalistic, deviates from the decorative pomposity of Nguyen Gia Tri in much the same way that, in Europe, the artist challenges the current uses of lacquer, which are merely decorative or exotic. Though rooted in long artistic history, Bui Huu Hung’s art is a novel tradition addressing the human values which the artist glorifies with all the power of his talent.

“THE COLOURS OF VIETNAM” SHINES IN US